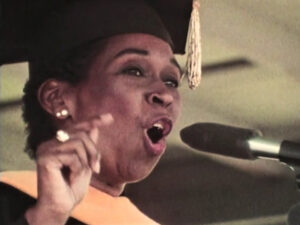 Using documentary footage and in-depth interviews, Black Power in America: Myth…or Reality? (1986, 58 mins.) examines how the Civil Rights Movement of the 1960s changed the Black community and the rest of American society. The film profiles a group of successful African Americans working in professions not traditionally associated with black leadership, and takes a candid look at some of the problems facing the African American community.