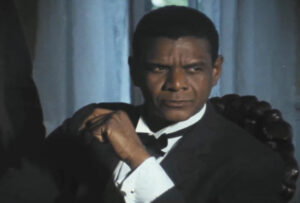 Dramatic reenactments and rare archival photographs in Booker T. Washington, The Life and The Legacy (1986, 29 mins.) depict the life of this highly controversial African American who was considered the undisputed leader of Black America at the turn of the century. Narrated by television producer Gil Noble.

“Booker T. Washington is notable for the way it seeks to understand the historical pragmatics of Washington’s accommodationist politics, while also continuing to question them through critical responses from a committed W.E.B. Du Bois and a “reporter” (played by Gil Noble) covering his life…

Booker T. Washington and Frederick Douglass, along with the numerous other government-sponsored (*) films on a broad range of topics, enabled Greaves to keep working and producing films on important African American subjects—no mean achievement during a period in which projects concerned with African American culture were receiving little national attention or funding.”

(*) Both the Booker T. Washington and the Frederick Douglass films were made for the National Park Service and were part of public presentations at NPS historic sites. 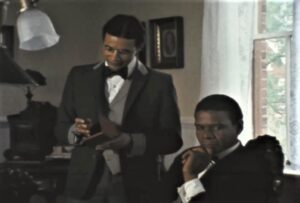