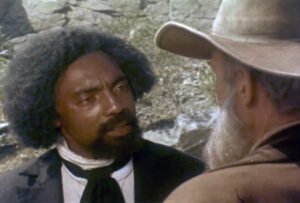 Frederick Douglass, the orator, writer, newspaper editor and publisher, escaped from slavery and spent a lifetime in the struggle for racial justice and women’s rights.
In Frederick Douglass: An American Life (1985, 33 mins.), key events and major historical figures, including Harriet Tubman and John Brown, are dramatically recreated to tell the story of this major 19th century abolitionist and civil rights advocate. 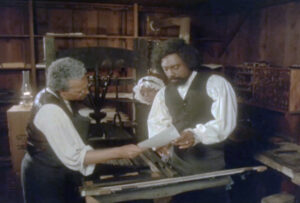 On July 5, 1852, Douglass gave a speech to the Rochester Ladies’ Anti-Slavery Society at Corinthian Hall in Rochester, New York, entitled The Meaning of July Fourth for the Negro.
Midway through the 18-page speech is this now-famous passage, which has earned the speech its more popularly known title: What to the Slave Is the Fourth of July?

“What, to the American slave, is your 4th of July? I answer; a day that reveals to him, more than all other days in the year, the gross injustice and cruelty to which he is the constant victim. To him, your celebration is a sham; your boasted liberty, an unholy license; your national greatness, swelling vanity; your sounds of rejoicing are empty and heartless; your denunciation of tyrants, brass fronted impudence; your shouts of liberty and equality, hollow mockery; your prayers and hymns, your sermons and thanksgivings, with all your religious parade and solemnity, are, to Him, mere bombast, fraud, deception, impiety, and hypocrisy—a thin veil to cover up crimes which would disgrace a nation of savages. There is not a nation on the earth guilty of practices more shocking and bloody than are the people of the United States, at this very hour.”