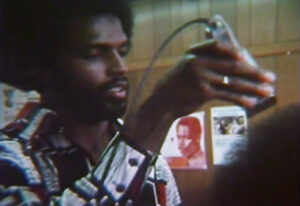 Just Doin’ It (A Tale of Two Barbershops) (1976, 28 mins.) is an intimate portrait of two inner-city barbershops that provide patrons with more than haircuts. This award-winning film, shot candid-camera style, is filled with humor, witty repartee and penetrating insight about human nature, American society, and race. 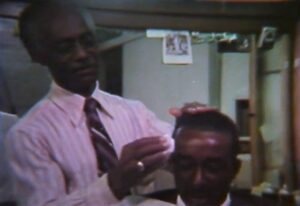 Sonja Bahn-Coblans/Arno Heller: Did you have an overall theme in mind before you started filming?

SB/AH: Does that apply to all black barbershops, regardless of social stratification?

WG: Well, it seems to me that it doesn’t matter how up-scale the barbershop is or how down in the so-called ghetto it is. While the articulations may not be the same, they will certainly give you all of what I’ve just mentioned.

SB/AH: When you conceived the film, were you thinking of a white and/or a black audience?

WG: While I assumed that these films would be seen by white audiences, the central concern was to raise the consciousness of the black community and also to express that community’s concerns to the larger, white American audience.

WG: No, but I researched these barbershops, taking still pictures there to acclimatize the patrons and the barbers to having a camera present. By the time we came in with the motion picture cameras, which were also hand-held, the patrons and barbers were not as intimidated as if we had come in straightaway with motion picture cameras. We never used tripods, just shoulder-mounted cameras, and there may have been one or two lights at most.

SB/AH: But by putting the church scene at the end you also created a kind of story reaching from the beginning of the film to the end.

And yet, everything that you saw in Just Doin’ It happened by chance! The nephew of Martin Luther King just happened to wander in. But to answer your question about the story: it develops out of the organizing principle of the film, which, let’s say, is justice.

SB/AH: But that was not your organizing principle going in?

WG: No. Surfers swim around until they see a wave that they want to ride, then they surf into shore. The same thing happens with a film of this kind: you’re looking for a wave to ride. It could be a wave of love or a wave of fear; it could be a wave of justice. Having opened yourself up as a cinéma-vérité filmmaker to “whatever happens is going to happen without my tampering with it,” you film all those things that seem to be electrifying, exciting, interesting. Oftentimes you’ll find yourself gravitating toward one or another kind of wave to surf. And you may see three, four, or five different waves, not just one—but there will probably be one tidal wave that will carry everything, including the subsidiary waves, into shore toward the climax of the film.

SB/AH: But despite your cinéma-vérité approach, we clearly see subliminal associative symbolic devices in the film. To what extent did you consciously plan them? For example, when there’s the talk about Vietnam, we see the little boy playing with a toy airplane; and when the nephew of Martin Luther King talks about himself, you zoom in on King’s picture on the wall.

WG: Yes. This is what I mean by surrendering. If you come into this reality, you leave yourself open to it. I didn’t know the little boy was going to be there with a plane; I didn’t tell him, “When this fellow talks about Vietnam, you start playing with your plane.” No. It’s just that in the process of shooting, I tried to be conscious of whatever was inside that field of vision. Either while I was shooting or later, when I was editing, I saw the connection, the metaphor, the symbiosis, the sympathetic vibrations between that toy plane and the Vietnam story.

SB/AH: Your process seems like a mixture of calculation and intuition.

WG: That’s right. It’s the intersection of the scientific method with art.

SB/AH: It would be interesting to study the footage to see what you left out. Our students have seen the film, and one question that cropped up again and again is its possible “message.” Would you say you had a particular message?

WG: I’d say Just Doin’ It is a bitter indictment of America, an indictment of modem civilization; it’s a plea for a higher level of consciousness and sensibility. It’s an attempt to get people to think of black people as human beings with a variety of strengths and weaknesses and foibles, and also, I guess, to enjoy the experience that I always enjoyed in a black barbershop.

SB/AH: The overall atmosphere of that film is not at all negative. We have this strong feeling of an intact community, of people criticizing a lot of things, but being alive in a functioning community. That, in itself, is a kind of consolation.

WG: Absolutely! And a kind of dignity. The whole issue for me is the dignity of the black community.

The African American has been under assault for hundreds of years. Today the assault is not as vicious physically as it has been, but psychological assaults are still taking place. There have been so many assaults that it’s almost a miracle that African Americans have survived, and the fact that we have survived what we’ve survived is part of “just doin’ it.” But the phrase is not a political statement as such. It’s a human statement, a triumph-of-the-human-spirit statement that flows out of the racial genius of the African, who has been on the planet for thousands of years, who has gone through innumerable permutations and combinations of adversity of one kind or another and has survived. It’s in that sense that “just doin’ it” has its deepest meaning.