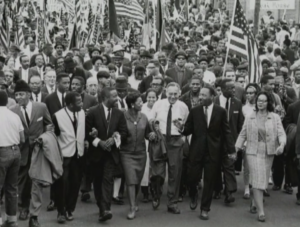 Having overcome racial prejudice and poverty to become Undersecretary General of the United Nations, Bunche’s life offers a unique window on many key issues and historical events during the middle of the 20th century, including international peacekeeping, decolonization and human rights.

Also available is the supplementary series of 12 teaching modules, Ralph Bunche: The Odyssey Continues… (2003). Each module focuses on a particular theme, time period or major development in Bunche’s career. Please note: There is a separate website, RalphBunche.com, which has extensive information about the 12 Teaching Modules as well as more information about An American Odyssey.

“A stunning film on the career of super diplomat Ralph Bunche is readily winning a place among the great screen biographies.”
–Erik Barnouw, Columbia University

“We should restore Bunche’s reputation not so much for his sake as for our own. His fall from prominence is tragic, but the loss is much more ours than his.”
–Arnold Rampersad, Dean of Humanities, Stanford University

From an interview conducted by Jacqueline Di Ciara in 2004:

JDC: How did Bunche challenge already-established notions of black leadership?

WG: He felt that some black leaders were very loud or articulate in their positions, but they weren’t effectively doing things that would help to change the quality of life in the black community. That is to say, it’s one thing to criticize but it’s another to get in the middle of a particular situation and make policy changes within that situation, because of one’s intellectual gifts and one’s understanding of what the right solutions should be.
For example, the chapters of the United Nations Charter – which he wrote – laid the groundwork for these various countries that gained their independence from colonial powers. He worked, for example, with Eleanor Roosevelt who admired his insight and understanding, his genius and they worked very closely together to get the Universal Declaration of Human Rights accepted by the General Assembly of the United Nations in 1948. He was very effective, according to the American Ambassador to the UN, Ernest Gross, who said that if it were not for the team of Ralph Bunche and Eleanor Roosevelt, there would be no Universal Declaration of Human Rights. He said Bunche lobbied the various delegations to support Eleanor Roosevelt’s presentation of the Universal Declaration of Human Rights. And that was a very important act, because it helped create a climate and a feeling for human rights not only in America but throughout the world and it provided a climate in which the Civil Rights movement in America was able to function and gain strength, because Black Americans had the Universal Declaration of Human Rights to back up the people who were petitioning for human rights.

JDC: Do you feel that his work affects the portrayal of blacks today in the media?

WG: Well, yes. I think that to some degree it does. Black people today are more and more depicted in less stereotypical terms than they were some years ago, although there are still problems in the American media where very stereotypical concepts are accented. One can say that while there is progress in the portrayal of Black people in the media, there still is a long way to go. You still get a lot of negative stereotypical portrayals which don’t help the perception of the African-American in the wider thinking of people who are not African-American.

JDC: What do you feel that some of these negative portrayals are in the media?

WG: Well, you get a lot of these television shows that make fools out of black people and that really don’t show the other side of the Black experience. It is one thing to focus only on those parts of a particular group that are laughable. They are not seriously taken when they are depicted in other areas of American life. You don’t see as many judges, as many doctors, as many lawyers, and so on, portrayed by Black people on television than you see of white professionals. In percentage term, Black people make up 10-12 percent of the population of this country. Those demographics don’t play out on the daily American screen. You certainly don’t see them in 10-12 percent of the serious programming on the American screen.

JDC: How do you see Bunche in relation to someone like Martin Luther King?

WG: Martin Luther King was said to be a very important spokesperson for human rights in America. But, because of this Universal Declaration of Human Rights that Bunche worked so closely with Eleanor Roosevelt on, he helped create the worldwide climate for human rights that enabled Martin Luther King, Malcolm X, and various other black leaders and other white leaders to gain increasing support.

–Excerpt from “The Story of Ralph Bunche Through William Greaves” by Jacqueline Di Chiara in AIM: America’s Intercultural Magazine, 2004. The full text can be found on the Reviews page. 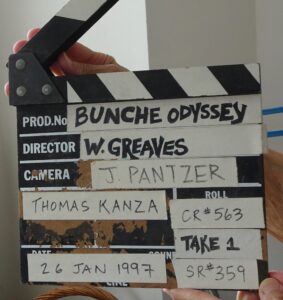