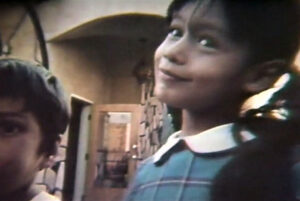 Voice of La Raza (1972, 39 mins.) deals candidly with discrimination against Latino Americans, particularly in the area of employment. In the film, actor Anthony Quinn travels across the country to meet with a cross-section of people from the urban and rural barrios of America. Quinn also shares his own experiences growing up as a Mexican American in the slums of Los Angeles. 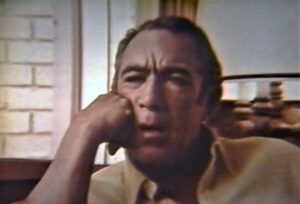 “Voice of la Raza was conceived of as an effective way to educate audiences about labor discrimination. The film mobilizes aesthetic strategies associated with politically committed filmmaking, including shooting on location and showcasing the voices and faces of everyday people in lieu of experts. At the same time, the film employs experimental techniques including dramatizations and psychodramatic confrontations that, understood in the context of Greaves’ work in the late 1960s, highlight the increasing radicalization of Latinos in the U.S. and call attention to the need for social change. Thus, while some elements of the film align with the federal government’s project of constructing an ethnoracial group, Hispanic, whose needs could be addressed by agencies like the EEOC, others draw attention to relationships of power between and within racial groups, conflicts within minority groups, and the role of media in effecting social change.

Shot in 16mm on the streets of Los Angeles, New York, and Albuquerque, Voice of La Raza focuses on everyday people. Descriptions of the film suggest that it emerged organically ‘out of conversations and questions asked by Quinn in his travels across the country concerning the plight of Spanish-speaking Americans.’ Characterized as an example of cinéma vérité or direct cinema, the film is structured around a series of interviews with ‘witness-participants,’ a strategy that Bill Nichols argues characterizes politically committed films of the 1970s.

…While Greaves combines techniques such as montage, direct address, and multilayered narration to construct a shared identity that would fit more readily into the federal government’s framework for addressing inequality, he also employs experimental techniques to explore tensions within the Latino community and express the urgency of communication between and within racial groups.”